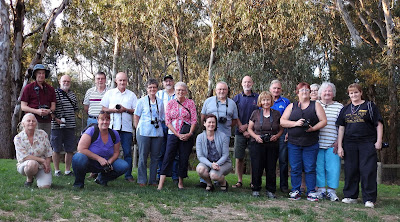 The first meeting for 2016 was held at the Y Water Discovery Centre at the Yea Wetlands.

Our guest speaker was Ron Litjens who manages the web sites
https://focusonfauna.wordpress.com/ and http://euroaarboretum.com.au/

Ron let us in on what inspired his interest in photography. His parents were involved in photo processing and he spent many hours in the lab as a child. He developed a keen interest in photography and in particular insect photography early and has continued to follow that interest. He worked for many years as a scientist for Kodak until they ceased photo paper manufacture in Melbourne. Ron does most of his photography on a Nikon P900.

We all took a walk around the wetlands to look for photo opportunities and on return to the meeting room wished Ann A a happy 70th.

The committee presented details of a new member photography competition and a robust discussion on how it should operate ensued. Members were asked to bring any further ideas to the next meeting for the committee to evaluate and finalise the details.

New rules for the "Capture an Idea" competition were discussed. The club will allow electronic manipulation to entries this year and judging will include a guest judge each month with feedback so that each entrant can get constructive criticism/praise to help them improve their skill.

We also had several new members attend. All in all a very interesting and informative meeting.

Homework:- Send by email to Alan C your best photo of the night by Monday 7th March

Capture an Idea for March is "OPEN"  ie the word open such as open flower/door or ...? Get creative.