This is the perfect excuse to get some night photography practise. So clean the lens , check the tripod and swat up on night exposures. Find a location with clear vision of the Eastern horizon, download Moon Phases App for your phone or the SunCalc.net App to get the exact location in the sky of the rising moon. Last blue moon I missed the moon rise while photographing the sunset...with my back to the moon so did not see the moon until it had been risen for 10 minutes. 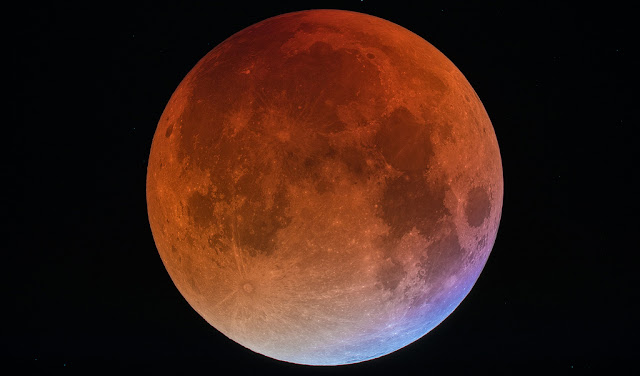 First Super Blue Blood Moon in over 150 years is coming
·      BY SHANNON VERHAGEN |
·      JANUARY 12, 2018
On January 31, Australia and the Pacific will have front row seats to the rare astronomical event.
FOR THE FIRST time in over 150 years, three lunar phenomena will collide – producing a Super Blue Blood Moon on January 31.
Not only will it be the second full moon in January, but the moon will also be close to its nearest point to Earth on its orbit, and be totally eclipsed by the Earth’s shadow.
While the three aren’t particularly rare – the last Super Moon was on January 2 this year, and the last Blood and Blue Moons were in 2015 – the chances of them all occurring at the same time are quite slim.
The result will be a spectacular display – a very large, red full moon – which hasn’t occurred since March 1866.
Big and bright
Australian Astronomical Observatory astronomer Fred Watson says a Super Moon is defined by a full moon occurring at the nearest point to the Earth on the moon’s orbit.
Due to this proximity, Super Moons appear seven per cent larger and 16 per cent brighter than the average full moon.
Fred says the term ‘Blue’ Moon originated in folklore, and is defined as the second full moon in a calendar month – with the first on January 2, and the next on Jan 31 at 9:26pm WA time.
In Western Australia, this will actually be followed by a Black Moon, which is the lack of a full moon in a calendar month – with no full moons until March 2.
Due to the time difference, the second full moon will fall just after midnight in NSW and Victoria (12:26am) bringing it onto February 1 – therefore not technically a blue moon for Sydneysiders and Victorians – but it will still be a spectacular sight.
“The reason why the times are so precise is that it is defined by the moment the moon is directly opposite the sun in its orbit,” Fred says. “We think of them lasting a few days because they remain large in the sky, but there’s an astronomical definition that fixes the full moon in time.”
Blood Red
A Blood Moon is the modern term for a total lunar eclipse – when the moon is completely blocked by the Earth from sunlight.
“Because the moon’s orbit is slightly tilted, most of the time the moon goes above or below the shadow of the Earth,” Fred explains. “The Earth blocks part of the Sun, casting a shadow in space – and the moon passes through that shadow.”
“When the two line up exactly – you get an eclipse.”
The eclipse will last for over an hour, however, Fred says the moon will not be completely dark, instead it will have a reddish glow – giving rise to the term ‘Blood.’
“The Earth’s atmosphere has the property of scattering the Sun’s light,” explains Fred. “The blue light is scattered more readily than the red – which is why the sky is blue in the day.”
“During an eclipse a phenomenon called Rayleigh scattering occurs, taking out the blue and leaving only the red – causing a deep infilling of the Earth’s shadow, called a Blood Moon.”
Unlike a solar eclipse, a lunar eclipse is safe – and beautiful – to observe, and Fred encourages people to head outside and have a look.
“Once it gets into the deep red shadow, you get the best view once you get out of the city – and binoculars make it really special,” he says.